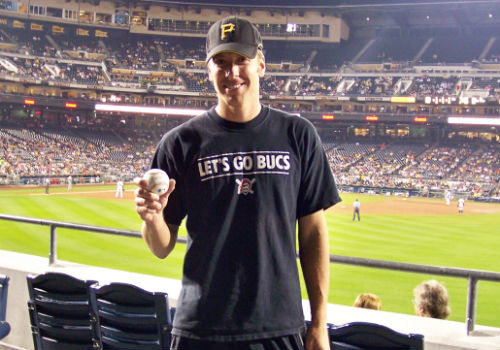 Jabs, standing in front of the railing where he snagged the homer, poses with his second home run ball of the season.Last Wednesday's game at PNC Park didn't start out particularly well for Erik Jabs. A huge thunderstorm hit Pittsburgh in the afternoon, cancelling BP, and ballhawking opportunities were almost nonexistent during the pre-game warm-up period. It was so bad, in fact, that Jabs nearly got shut out to end a streak of 168 straight games with at least one ball. By game time, he had only narrowly escaped this fate by retrieving a ball from the field that had been rolled to the fence by Chris Carpenter. This miserable day of ballhawking soon got a lot better, however. Jabs was standing behind the bleachers in right-center when John Bowker came to bat in the second inning and launched a towering fly ball that appeared to be heading for almost the exact spot where he was standing. "The second he hit the ball, I knew it was gone," Jabs wrote on his blog. He took a few steps back but then realized that the ball wasn't carrying as well as he thought. He came in on it, and as he approached the railing he could tell that the ball might end up falling short. Thankfully, it carried just far enough. "At the last second, I turned my glove over and reached over the handicapped seats, and the railing to make the basket catch," he wrote. Jabs raised the ball high above his head in post-snag celebration, which can be clearly seen on the video. Up to that point, the only thing missing from his 500-plus ball season was a snag of a game home run on the fly, so Jabs was overjoyed to finally accomplish it in the closing weeks of the season. For screenshots and a link to the video, head over to Erik Jabs' Blog