Down to the Wire! Jabs 6 Balls Away From Record
Regular Season Ends With 538 Balls, Record-Breaking Snag Must Now Come in Playoffs
by Alan Schuster, October 8, 2010 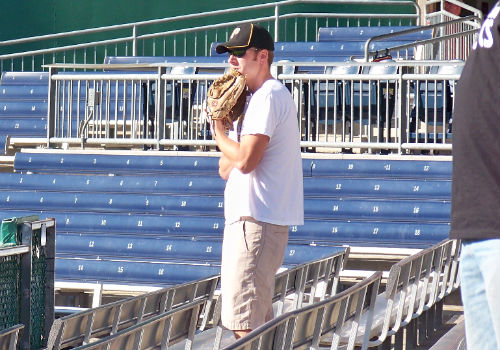 Jabs, shown here at PNC Park, is now forced to drive over four hours to Cincinnati to pursue the single-season record."I got to the stadium at 4:35, and thought nothing of it when there was no line at the gate to get in," wrote Erik Jabs to begin the recap of his final regular season game. "Then I walked into the main concourse and heard an eerie sound." Jabs was in Cleveland for a weekday game on September 29th and was fully expecting to snag the six balls he needed to set a new myGameBalls.com record for balls snagged in one season. But there was a big problem when he entered the stadium. The eerie sound he was referring to? It was the sound of the Public Address Announcer's booming voice over the loudspeaker. As Jabs quickly found out, the previous night's game had rained out, forcing a doubleheader. "I couldn't turn around. I had entered the stadium. It was an official game," he wrote. "I was screwed." And despite his best efforts to snag a foul ball during the game, he came up empty, leaving him stuck at 538 balls and ending his consecutive games streak at 182 games. To make matters worse, in the days to come he became horribly ill and suffered through an extreme sickness for 10 days. He's back to health, thankfully, and now he's got one final chance to break Zack Hample's record of 543 balls in one season. Jabs will travel to Cincinnati and battle the playoff crowds to try to come up with six balls he needs to become the new record holder. The Reds are scheduled to play at home on Sunday and Monday. Stay tuned to Erik Jabs' Blog to follow his quest for the record