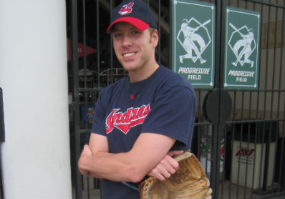 The 2010 myGameBalls.com Ballhawk of the Year, Erik JabsIn the ballhawking world, 2010 was the year of Erik Jabs, and the ballhawking community confirmed that statement last week by voting Jabs the myGameBalls.com Ballhawk of the Year. The overwhelming choice for the season's top honor, he earned 22 first place votes and 2 second place votes for a total of 70 points. Jabs made history this season by snagging 544 balls and breaking the single-season record. Over 88 games, he averaged 6.18 balls per game, recorded 14 double-digit games, and snagged six game balls including two game home run balls. The highlights for his season are almost too many to mention, but they include snagging home run balls in both Cleveland and Pittsburgh, snagging 13 balls in one game at PNC Park, snagging his 1,000th career baseball, snagging two foul balls in one game on two separate occasions, and of course breaking the single-season record. Jabs' 544 balls break down into 384 at PNC Park, 108 at Progressive Field, 18 at Nationals Park, 16 at Camden Yards, 13 at Great American Ballpark, and 5 at Citi Field. In terms of how he snagged his balls, 260 were hit, 130 were thrown, 76 were retrieved, and 78 were found. Following Jabs in the voting were Zack Hample (43 points), Nick Pelescak (25 points), Dave Edlund (9 points), Ballhawk Shawn (9 points), Rob McCoy (6 points), Rick Gold (6 points), and Don Chilcote (4 points). Here's the complete results: