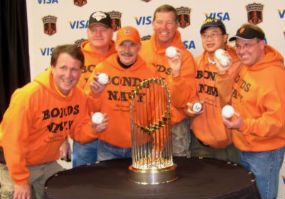 Members of Bonds Navy celebrate a year of great baseball and great ballhawking.When balls fly into San Francisco's McCovey Cove, it's a win-win situation. The Giants' players get to celebrate a big home run, while meanwhile out in the cove the "Bonds Navy" ballhawk group gets to battle it out for the ball in front of the television cameras. 2010 was a huge year for both groups. On the field, the Giants played near flawless baseball in the postseason to bring a World Series Championship to San Francisco. In the cove, Bonds Navy got its share of action, including six home run snags by Dave Edland who led myGameBalls.com in that category. Yesterday, two and a half months after Tim Lincecum hoisted the World Series trophy over his head in celebration, the Bonds Navy ballhawks enjoyed their own celebration with the trophy. The group gathered in Santa Clara, California, where they hung out and took some photos. "We realize what a 'Cinderella' season we experienced as baseball fans and today was just the final celebration of a special, maybe once in a lifetime season!" remarked Edlund. For the photos, they wore matching Bonds Navy hooded sweatshirts and brought along some of the most memorable balls they've snagged in the Cove over the years. Edlund, for instance, brought the last Giants splash hit (#55), hit by Pablo Sandoval, and most notably, Martin Wong brought Barry Bonds' 757th home run ball. While enjoying their photo-op with the trophy, the ballhawks couldn't help but start talking about next season. "We vowed that one of the Bonds Navy is going to be the MyGameballs.com home run leader for 2011," Edlund said. "We have a Willie McCovey perpetual trophy that we pass around for our own home run ballhawk derby, but why not go against the best at Mygameballs.com!" Sounds like a challenge. In two short months, ballhawks across the country will try to overtake Edlund as the next home run king of myGameBalls.com. Follow the Bonds Navy ballhawks on SplashHit.com