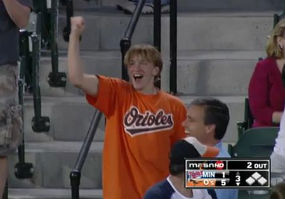 Anderson celebrates his first home run snag of the season.Ballhawks in Baltimore were celebrating this offseason when the Orioles signed power hitter Vlad Guerrero, knowing that the O's new designated hitter would be depositing a healthy share of balls into the outfield seats. So far, Guerrero has not disappointed. Last week Tim Anderson became the first Baltimore ballhawk to snag a game home run off the bat of Guerrero, making a clean catch of a towering homer into the left field seats. The ball was hit within just a few feet of where he was sitting, so all he had to do was fend off a handful of other fans and reach up and make the catch. "When I caught the ball, two things went through my head," Anderson said. "One, this game is on ESPN. Two, I have to do something that will get me on the screen. So, in the heat of the moment, I decided to clinch my fists in the air and scream as loud as I could. I guess that paid off. MASN kept me on the air for a long time and kept showing it and all the local news stations played the highlight that night and the next morning." Anderson's extended face time on TV allowed friends and family to witness his exciting moment live on the air. Within seconds, a barrage of text messages hit his phone congratulating him on the snag. "I think the best part was when I called Ben (bhuff on mygameballs)," he said. "He usually comes to games with me, but that night he decided to go somewhere else. That somewhere else happened to have televisions with the game on. I called him and the first thing he said was, 'I saw it.'" Watch Tim Anderson's home run snag on MLB.com