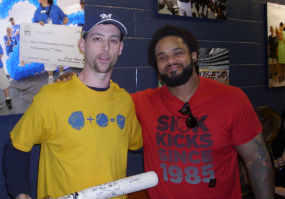 Yohanek and Fielder pose for a photo after exchanging the home run ball for a signed game bat.Earlier this week Nick Yohanek, AKA The Happy Youngster, snagged his first game home run of the year on a clean catch of a Rickie Weeks bomb. Very quickly, however, the Weeks home run snag became old news. That's because two nights later he snagged another one, his 60th lifetime game home run, and the significance of the snag made the Weeks snag look like a snag at a Little League game in comparison. The mighty Prince Fielder belted his 200th career home run Wednesday night, and Yohanek made the snag of the milestone ball. "All week, I visualized snagging Fielder's 200th," he said. "I even went so far to tell my wife, 'when I catch Prince's 200th, I'm going to ask for the opportunity to personally present it to him. I will also request a personalized game bat from Prince. No other strings attached.'" Yohanek was sitting in right-center field when Fielder launched the towering shot, and like he's done so many other times he tracked it perfectly and came down with it, despite some fierce competition. "On the catch, it appears as if I bobble the ball," he said. "Not a chance. As I was bringing it in closer to my body, an older lady took a few cheap swipes at my glove in a last ditch effort to jar it loose. That's why you see me on the video using my dominant hand to cover the glove and a slight crouch to gain leverage." Just as he had planned, Yohanek then made his request to present the ball to Fielder, and before he knew it he was outside the Brewers clubhouse with Fielder's family waiting for him to come out and retrieve his ball. After some conversation with the family in which Fielder's wife interestingly recognized Yohanek from a previous home run snag in Denver, the 200 home run man emerged. The Happy Youngster and the Brewers' superstar slugger shook hands and Fielder presented him with a signed game bat. They posed for some photos together and talked briefly, creating a memory that Yohanek will cherish forever. Watch the replay of Prince Fielder's 200th home run and seqsequent snag by Nick Yohanek