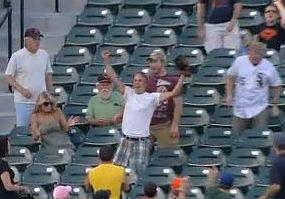 Anderson rejoices after snagging the J.J. Hardy homer on the fly."Consecutive Games With at Least 1 Game Home Run" is not an official stat on myGameBalls.com, but if it were, Baltimore ballhawk Tim Anderson clearly would hold the lifetime record. Last weekend in Baltimore the 17-year old garnered national recognition after snagging game home runs on three consecutive nights. He snagged a Carlos Quentin home run on Tuesday night, followed that up with a J.J. Hardy homer on Wednesday, and finished it off with an Alexei Ramirez bomb on Thursday. The incredible ballhawking story was picked up by several media outlets, most notably Sportscenter who featured his leaping grab on the Ramirez homer. Read more on the Baltimore Sun Read another article on MLB.com Read even more on the Yahoo News