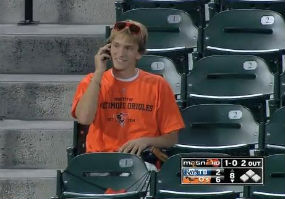 Anderson makes a few phone calls after snagging his second homer of the night.Other than the players on the field, Tim Anderson probably has been the most well known individual at Camden Yards this season. Anderson garnered even more media attention last week after snagging two home run balls during the Orioles/Rays game. Anderson chased down a Chris Davis homer in the fourth inning, scrambling for it in the sparsely-populated left field bleachers and winning out against a handful of competitors. A few innings later, he positioned himself perfectly on a Matt Wieters home run and snagged it on the fly. After the Wieters snag, he held up two fingers as the television cameras zoomed in on him. It was Andersons' myGameBalls.com-leading eighth game home run snag of the season. It earned him Number 4 on ESPN's top plays, and he also received a writeup on MLB.com. Check out MLB.com for the full article