Ballhawk League Returns for 2nd Season
After a Successful 2009, Erik Jabs is Putting Together a Field of Ballhawks to Compete Again in 2010
by Alan Schuster, March 25, 2010 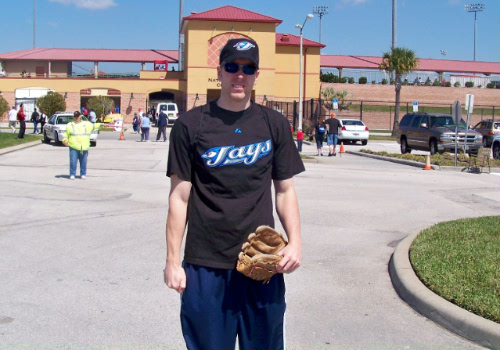 Ballhawk League Commissioner Erik Jabs warms up for the 2010 season at a Spring Training game at Osceola County Stadium.Spring Training is now in full swing, with Opening Day now just a week and a half away, and the players aren't the only ones anticipating the start to the 2010 season. Twenty competitive ballhawks, some with decades of experience and others embarking upon their "rookie" season, are preparing for Week 1 of Erik Jabs' Ballhawk League (BHL). 2010 will be the BHL's second season, with the majority of participants from the 2009 inaugural season returning. Zack Hample was dominant in last year's league, finishing with 525 balls. He was joined in the Top 5 by Erik Jabs (412), The Happy Youngster (372), Alex K (316), and Chris P (287). 4 of the top 5 will return this year, setting the stage for another competitive season. Overall, the 2010 field includes 13 myGameBalls members: Nick Pelescak, Erik Jabs, Matt Jackson, Joe Faraguna, Donny Haltom, The Puck Collector, District Boy (Aaron King), Greg Barasch, Zack Hample, Alex, Max Van Hollebeke, Mike M, and James B. The BHL keeps track of a variety of statistics in addition to Total Balls, including Games Attended, Average Balls Per Game, Hit/Thrown/Device Balls snagged, and Game Balls snagged. There may be a few rules changes this year, the most significant of which are possibly dividing into Junior/Senior divisions and instituting a point system to weight balls according to their difficulty. The 2010 official rules have not been published yet, but Jabs is currently working with participants to hammer out the details. This season looks to be anybody's game. Hample and The Happy Youngster have both stated that their game attendance will be down this year, so that should open the door for several others to battle them for the top spot. It will interesting to watch this "pennant race" of sorts play out throughout the long season. Read more BHL details as well as a profile of all 20 members on Erik Jabs' Blog