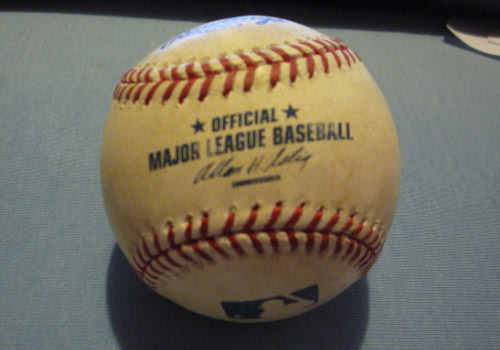 Weil's second career foul ball, pictured here, took a few bounces before ending up in his glove.It's every ballhawks worst nightmare -- being in prime foul ball territory but being boxed out from the aisle position. This was the case on May 16 for New Yorker Ben Weil, AKA Benny Bang Bang, who was in a great foul ball section in the 200 level at Miller Park but was completely blocked from the aisle by a family of four. He watched helplessly for the first couple of innings as several fans snagged foul balls, including one guy who snagged two. "I then noticed there were a few people standing back there with gloves," he said. "and I decided enough was enough, and I was not going to remain in my seat any longer." Weil joined the crowd of ballhawks situated behind the section and prepared to compete for foul balls. A seasoned ballhawk himself, Weil wisely moved slightly to the third base side for lefties and slightly to the first base side for righties. "I noticed the ushers noticed me, but didn't seem to care," he said. "but there was a police officer who was watching me, but never said anything." Weil stayed with his strategy throughout the game, and when right-handed batter Greg Zaun came to bat in the fourth inning he ranged to his right and followed Zaun's at-bat intently. Zaun fouled one off about a section to the right, and Weil took off running. It was a line drive so there wasn't much time to spare, but Weil immediately could tell that it was headed straight for a fan in the last row of seats. The fan stood up and attempted the near-impossible bare-handed snag of the liner. "He didn't have a glove, so I figured it would go right through his hands," Weil said. "This is exactly what happened, and all he did was basically slow the ball down, because it then ricocheted off the brick wall in the back of the aisle, below the press boxes, and then rolled right towards me." There were a couple other fans tracking it, but Weil got to it first and held on tight as an aggressive fan tried to snatch it from his glove. Just like that, he had snagged his second career foul ball and first of the 2010 season. "I didn't really get excited, I think I was just in shock," he said. "I just put the ball in my pocket and walked away." Weil, from Queens, New York, has now snagged 38 total balls, the majority of which have been snagged outside of New York. In fact, in just three seasons of ballhawking he has snagged balls at 14 different Major League stadiums. Check out Benny Bang Bang's complete collection on his Member Page