Jabs Back on Top After Two Weeks of Dominance
PNC Ballhawk Adds 54 Balls, Highlighted by BHL Victory and 5 Balls at Strasburg Debut
by Alan Schuster, June 16, 2010 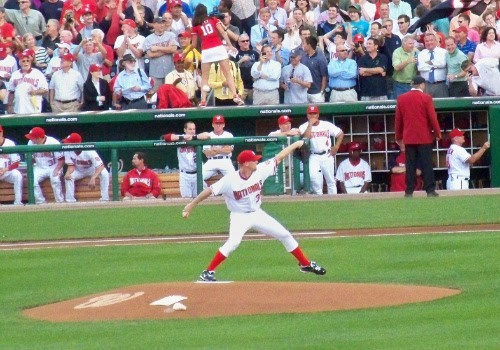 Jabs witnessed Strasburg's 14-strikeout win from the left field bleachers.Erik Jabs has officially hit mid-season form. So far in the month of June, he has snagged 54 balls to take sole possession of the top spot on myGameBalls.com and establish himself as the leading ballhawk in the Ballhawk League (BHL). Jabs put up consistent numbers at three different ballparks -- PNC Park, Nationals Park, and Progressive Field -- and had his best outing of the month on June 9 at Progressive Field when he snagged 10 balls. His best game in terms of the Competition Factor was the June 8 game at Nationals Park when he snagged five balls with a sellout crowd of 40,315 in attendance. That night of course was the much-anticipated debut of Nationals' phenom pitcher Stephen Strasburg. Battling the huge crowd, Jabs managed to snag two BP home runs and three toss-ups. By the end of BP the crowd had swelled to a playoff-type level, making his final ball, a BP home run hit by Ronny Cedeno, the most challenging by far. "When the ball came over the wall, four gloves converged at the spot to try and make the catch," he wrote on his blog. "The ball hit my glove, but I failed to make the catch with everyone bumping into me. The ball fell to the floor, and I quickly grabbed it with my throwing hand as everyone else's flailing arms and hands were grabbing for it." Of course, the most memorable part of the night had nothing to do with ballhawking. Strasburg was dominant, striking out 14 batters and hitting 100 MPH on the radar gun. The 40,000-plus fans in attendance cheered wildly throughout the game for their newfound ace. "The excitement and electricity running through the park was surreal," Jabs wrote. Jabs savored the experience of witnessing a Major League superstar's first career outing, but the next day it was back to business. He scored a double-digit game in Cleveland, his seventh of the season, and then stayed at Progressive Field for the final two games of the series, snagging seven balls in each game. He returned home to PNC Park on June 15 and snagged seven more balls to surpass 200 on the season. At his point in the year, Jabs is the man to beat, but lurking behind him are Nick Pelescak, Ballhawk Shawn, and Zack Hample, who all have shared time at the top of the leaderboard. Jabs and Pelescak will both get to add to their respective totals this week as the Pirates remain at home until Sunday. Regarding Strasburg, the media frenzy is continuing as he settles into the Nationals' starting rotation. Barring injury, he will be a dominant force in the league for years to come, and Jabs will be able to say he was at his debut. There is one thing, however, that neither Jabs nor any myGameBalls member has been able to do yet: get a toss-up from Strasburg. Follow Erik Jabs' game-by-game Ballhawking recaps on his blog