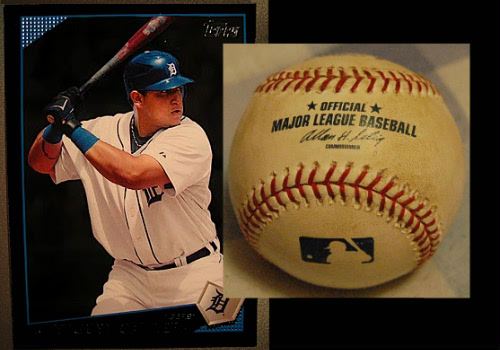 The foul ball, shown here, was hit by a potential Hall of Famer.Greg Barasch attended all three Mets/Tigers games last week at Citi Field, and much to his disappointment he failed to snag a single batting practice home run from the Tigers' powerful first baseman Miguel Cabrera. But when Barasch settled in to watch Thursdays game, the final game of the series, his frustration with Cabrera quickly came to an end. Cabrera fouled off a pitch into the upper deck, and the ball ricocheted down to the lower level where Barasch was wearing his glove and trying to position himself for the carom. He played it well but couldn't quite reach it as it sailed over his outstretched arm. "Luckily it landed just on top of one of those thermal bags that the in-seat service workers use to deliver food to people in the seats," Barasch said. "I grabbed it before anybody else could react." With the snag, his eighth career foul ball, Barasch has now snagged multiple foul balls in three consecutive seasons. He also has increased his lifetime total to 955, inching closer to the exclusive 1,000 ball plateau. After a slow start this season, he has now found his groove and has 80 balls, putting him in the Top 10. With the summer officially upon us, he is ready to make a big move toward the top. "I'm finishing up my internship next week and after that I'm going to start racking up some balls," he said. Check out Greg Barasch's Member Page to see his complete collection