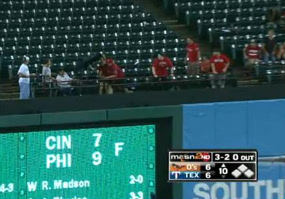 Barasch watched the fans in the front row bobble the ball into the gap, and he quickly raced over to attempt his cup trick.For New York ballhawk Greg Barasch, snagging his first career game home run in Texas last weekend was bittersweet. The entire time he was going after the ball with his cup trick, he knew that once he reeled it in he wouldn't be able to keep it. When the Orioles' Jake Fox hit a 10th inning homer to left field that was dropped by the fans in the front row, Barasch was watching closely from behind the third base dugout. When he saw the ball drop into the gap behind the outfield wall, he took off running, knowing that unless a stadium employee came over to retrieve it, he could probably snag it with his cup trick. When he arrived at the scene, however, he encountered some fans who were less than cooperative. The same fans who had dropped the ball into the gap refused to let Barasch stand over the ball to reel it in. Barasch knew that at this point his only chance was to do the unthinkable: offer to give them the home run ball. He knew that an opportunity like this might not come again for a long time, so he decided to offer up the ball. The fans moved out of the way and let Barasch perform his magic. He reeled it up, and before he could even savor the moment he was giving up the ball. Obviously he would have liked to have kept the ball, but in the end he was a pretty good sport about it. "Long story short, I didn't get to keep my first ever game home run ball or even take a picture, but it's all good," he said. Barasch totaled 25 balls on his five-game road trip that included games at Rangers Ballpark in Arlington and Minute Maid Park. He has now reached triple digits for the season with a total of 105 balls. See Greg Barasch's complete collection on his Member Page