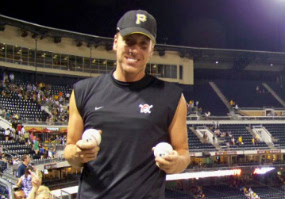 Jabs poses with his two foul balls, both snagged on the fly from the club level at PNC Park.Erik Jabs' storybook ballhawking season continued last night at PNC Park, where he snagged two foul balls in one game for the second time this season. Sitting in a club level seat, he snagged both game balls from the visiting Brewers, the first from Jonathan Lucroy and the second from Carlos Gomez. The club level seats were in a great foul ball spot, but according to Jabs there are a total of three things a ballhawk needs: skill, positioning, and luck. "I already had the positioning, I just needed some luck," Jabs wrote on his blog. Of course, the humble Jabs forgot to mention that he also possessed the other item -- skill. And when Lucroy hit a foul ball in the 6th inning, skill, positioning, and luck all came together at once. As Jabs describes it, the snag was pretty routine. "I shot up out of my seat, took a few steps to my left, and caught the ball on the fly," he wrote. When Carlos Gomez came to bat a few innings later and fouled a ball into Jabs' section, a little more skill was required for the snag. "Quickly I sprang to my feet and ran to my left," he wrote. "This foul ball was more of a line drive, and I had less time to react than I did with the Lucroy ball from earlier. I got to the spot in time to make the catch at my hip, and proceeded to be high fived by the usher and a congratulated by a few folks in the adjacent sections." Jabs was also sitting in the club level when he snagged two foul balls in one game earlier this year on April 21. Interestingly, the visiting team for that game was also the Brewers. In total, Jabs has now snagged five foul balls for his career. His overall count for this season now stands at 318. Jabs may be making a run at history next week. He seemed to hint on his blog that he will be visiting Progressive Field to attempt to snag A-Rod's 600th home run. A-Rod's total currently sits at 599 with the Yankees coming to Cleveland for a four game series beginning on Monday. Visit Erik Jabs' Blog to read more about his two foul ball snags