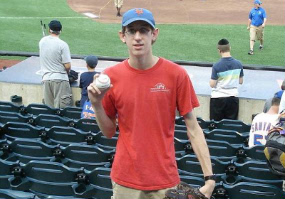 Barasch leads all ballhawks with 183 balls snagged at Citi Field, so it was fitting that he snagged his 1,000th ball there.For years, Greg Barasch has been battling tough crowds, tight security, and ballparks that are far less than ballhawk-friendly. Ballhawking in New York City can indeed be tricky, but Barasch has mastered the art of snagging balls in the Big Apple (and everywhere else for that matter) and now, still shy of his 21st birthday, he has collected over 1,000 baseballs. Barasch entered the gates of Citi Field last Wednesday needing 5 balls to officially join the 1,000 ball club. He didn't go into the game with any particular plan for number 1,000; instead, he just followed his usual ballhawking routine. "Before the gates opened, I decided I would just let #1000 happen naturally," he said. "I just wanted it to happen at Citi Field." He started things off well by snagging two BP home runs off the bats of Jeff Francoeur and Chris Carter. He then snagged two more balls with his ball retriever, once in left field and once in right. He had 999 balls at that point, and over in center field he saw two prime candidates to deliver number 1,000. Albert Pujols' son A.J. was shagging flies in the outfield along with Trever Miller's son. With a few words and a tip of his Cardinals' hat, he convinced A.J. to toss him the milestone ball. And with that simple toss from a future Hall of Famer's son, Barasch proudly joined the exclusive 1,000 ball club. It was a goal that he had been envisioning for quite some time. "A couple of years ago, I had set a goal of reaching 1,000 balls by the time I graduated college," he said. "Well, I ended up doing it almost a year ahead of my goal." Still enjoying the glory of his big accomplishment, Barasch hasn't thought too much about his future ballhawking goals. He's shooting to snag at least 200 this year and extend his lead in the Citi Field all-time balls list, but beyond that he hasn't laid down any long-term goals. Regardless of what he may do in the future, Barasch has already established himself as one of the country's premier ballhawks. His lifetime average of 5.95 balls per game ranks third on myGameBalls.com Check out Greg Barasch's complete collection on his Member Page