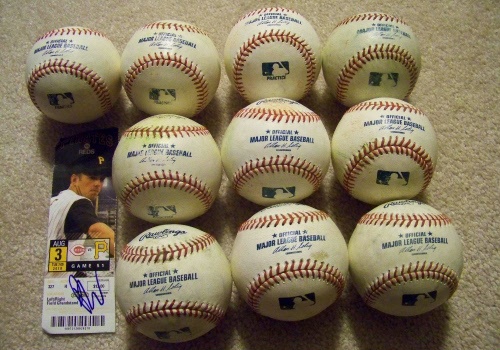 The 10 balls snagged by Jabs on Tuesday at PNC Park.Now with 374 balls on the season, Erik Jabs is showing no signs of slowing down. After snagging 37 balls over his past four games, Jabs has given himself a comfortable lead in the Ballhawk League (BHL) and is now poised to make a run at the single-season myGameBalls.com record. According to BHL stats, he is officially on pace to finish the season with 537 balls, just slightly behind the 543 ball record that Zack Hample set in 2008. Can he increase his pace enough to break the record? It will probably be close, but if the past week is any indication of what he'll do in the coming two months, he has a very good chance. Over his past four games, he's snagged 10 balls at Nationals Park, 4 balls at a very crowded Progressive Field, a season-high 13 balls at PNC Park, and then 10 more at PNC. The 10 balls on Tuesday night in Pittsburgh included three in-game toss-ups. His average per game now stands at 6.38. Jabs is also less than 50 balls away from becoming the sixth myGameBalls member to surpass 1,000 balls. With the Pirates at home until the 8th, he may even get there before the end of this homestand. A PNC Park season ticket holder who also takes regular road trips to out-of-town ballparks, Jabs has already attended 57 games this season and this frantic pace will only slightly be hindered in September when he returns to his teaching job. The ballhawking world will be glued to his blog for the remainder of the season as he approaches a historic single-season total. And who knows, if things go really well, A-Rod might not be the only person who gets number 600 this season. Stay tuned to Erik Jabs' blog for his latest ballhawking updates