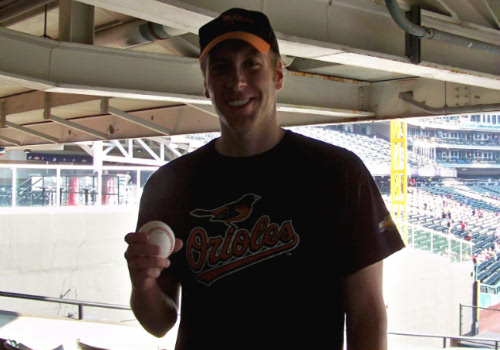 Jabs, who comes prepared with a t-shirt for both the home and visiting teams, poses for a photo with his 1,000th ball.In April Erik Jabs began the 2010 season, his fifth season of ballhawking at Major League games, with a collection totaling 578 baseballs. Five months later, he's now nearly doubled his lifetime total, and last week in Cleveland he reached a major milestone by snagging his 1,000th baseball. Starting the day with 998 balls and averaging over 6 balls per game, Jabs was all but certain that this would be the day that he would become just the sixth myGameBalls member to amass 1,000 balls. He quickly got on the board by using his trusty Cleveland Stick to retrieve a Shin Soo Choo BP homer from Heritage Park, his 999th career ball. Jabs then saw a few balls land in the Indians' bullpen, taking note that one of them might be retrievable via his glove trick. But knowing his next snag would be historic, he decided to hold out for a better opportunity. "In my opinion, the best way to get #1,000 would be to catch it as a home run on the fly," he wrote on his blog. "When that didn't happen, I made my way over to the bullpen to finally get 1,000." Wanting to fully document the occasion, Jabs got another fan to record a video that would later be posted on his blog. Despite snagging over 100 career balls via ball retrievers, this one would prove to be difficult. He failed on three attempts, but after struggling for over two minutes he finally reeled in the milestone ball. "It felt good to finally write four digits on a baseball for the first time," he wrote. Jabs would get to use a 4-digit label three more times on the day. He used a ball retriever for two more balls and got a toss-up from Brad Bergesen to finish with 5 balls and a lifetime total of 1,003. Jabs attended two more games in Cleveland, finishing up with 15 balls on the series and a lifetime total of 1,009. He has now pulled way ahead from the field in regard to his 2010 total, which now stands at a staggering 431 balls. Check out Erik Jabs' blog for his complete blog entry (includes video)