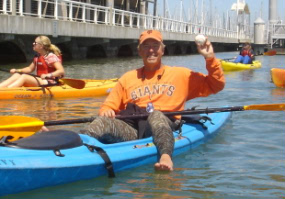 Edlund poses with his home run ball during Thursday's game. The homer was Sandoval's 3rd career home run that reached the cove on the fly.When Dave Edlund of San Francisco goes ballhawking, he faces a set of challenges that are entirely different from those of your typical ballhawk. While your typical ballhawk faces crowded bleachers, strict ushers, and an obstacle course of seats and railings, Edlund faces the varying conditions of the water in McCovey Cove, the limited mobility of being confined to a kayak, and the menacing presence of a competitor known as "Joe Dirt". A member of the "Bonds Navy" kayak club that regularly ballhawks in the cove, Edlund is having one of his best seasons as a ballhawk. Last week he paddled his way to two game home runs, increasing his season total to 4, just one behind Milwaukee's Ballhawk Shawn, who leads myGameBalls.com with 5. In Thursday's Giants/Padres game at AT&T Park, Pablo Sandoval launched a homer into the cove, and as the ball landed with a spash Edlund and Joe Dirt raced to snag it. "I was in the right place at the right time and only needed 4 paddle strokes to grab it with my hand," he said. "I lucked out a bit as it was closer to Joe Dirt (the portwalk ballhawk who uses a net to grab balls) than myself, but his fishing rod got a line tangle and that made all the difference." Two days later, the battle with Joe Dirt continued. Sandoval hit another bomb into the cove, and once again Edlund's strong paddling skills were up against the extended range of Joe Dirt's fishing net. Edlund prevailed again, getting his hand on the ball with Joe's net just inches away. Edlund has now snagged three game home runs off the bat of Sandoval, the first coming on July 30 of last season. His kayak club maintains a website, www.spashhit.com, where he posts write-ups and photos from his McCovey Cove snags. Read more about Dave Edlund and other San Francisco ballhawks on www.spashhit.com