Happy Youngster Increases Home Run Total to 57
Despite Limited Attendance in 2010, Milwaukee Ballhawk Continues to Add to His Collection of Gamers
by Alan Schuster, August 19, 2010 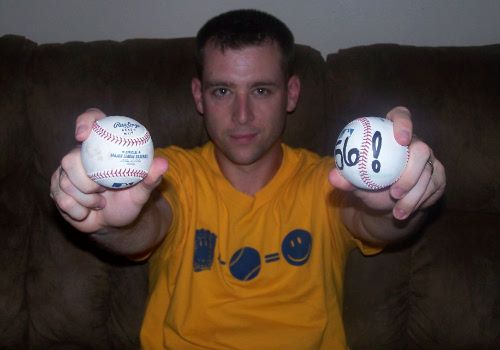 Yohanek, wearing his classic Happy Youngster T-Shirt, displays two of his recent snags, including Ryan Braun's 119th career home run.In the ballhawk blogosphere, one popular destination has been lacking in content throughout the 2010 baseball season. Milwaukee's Nick Yohanek, AKA The Happy Youngster, has only attended 16 games this season (down from 68 last season) and hasn't posted a new blog entry since April 24. The title of that last entry pretty much sums up the reason for Nick's extended leave of absence this season: "It's a Boy!" With the birth of his third child, The Happy Youngster has had his hands full with a houseful of youngsters of his own. Nevertheless, Happy has emerged recently by joining myGameBalls.com and logging his stats, reminding his faithful fans that he hasn't retired from ballhawking. In fact, he's shown that his home run snagging skills are still as good as ever. In his 16 games, he's snagged three game home runs, the most recent of which occurred last Thursday at Miller Park, bringing his lifetime total to 57. Fatherly duties kept Yohanek away from the ballpark throughout much of April, May, and June, but he got on the board in a big way in July when he took a trip to Rangers Ballpark in Arlington. Nelson Cruz hit a home run into the grassy berm in dead center, and Happy jumped onto the grass from his seat in left-center and chased it down. It was just his fourth game home run snagged outside of Milwaukee. A few weeks later he was back in Milwaukee and achieved his most memorable snag of the year. His favorite player, Ryan Braun, lifted a towering blast that Happy knew immediately would have the 400+ foot distance to reach his section in right-center. "I took my eye off the ball's path and jumped out of my seat, running about 10 feet to my right," he said. "I looked back up and found the baseball's path once again. I grabbed a spot on the railing between two older gents and the ball took its final descent safely in the webbing of my trusty old Ken Griffey, Jr. model baseball mitt." Just last Thursday, Yohanek added another gamer to his collection. Casey McGehee hit a home run to center field that bounced off the batter's eye into shallow centerfield, where it was picked up by Diamondbacks' outfielder Justin Upton. Just when it looked like Upton was going to go elsewhere with the ball, Happy made a pitch for the ball. "I let rip one of my whistles and he jerked his head," he said. "When he looked my way, I put up my glove. He hesitated, so, I fist-pumped the glove. Then, he lobbed it from over 100 feet away right to me." With three game home runs in 16 games this season, Yohanek is actually snagging gamers at a better pace than his 13 home run season in 2000, when he attended 88 games. So for those wondering what has happened to The Happy Youngster, he hasn't gone anywhere. He's still as good as ever. Watch The Happy Youngster snag Ryan Braun's home run on MLB.com