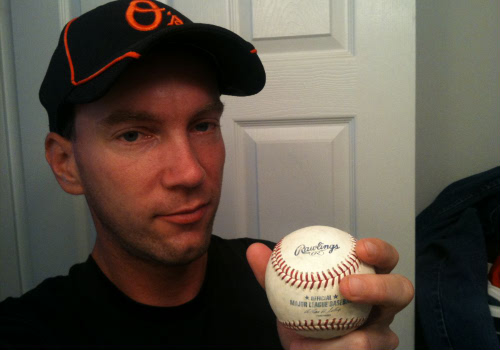 Gold's 40th home run snag was his first snagged outside of Oakland."I was starting to think I was never going to get another home run ball." Those words from veteran ballhawk Rick Gold truly capture his mounting frustration with his 12-year homerless drought. Yes, that's right: Gold, who made a name for himself by snagging 39 game home runs during his teens and early 20's in Oakland, entered Wednesday's game in Baltimore having not snagged a gamer since May 26, 1998. Of course, much of his homerless streak can simply be attributed to his choice of seats. Since his days in Oakland he hasn't sat in the outfield bleachers very often, significantly limiting his home run opportunities. But on Wednesday night Gold found himself an aisle seat in prime home run territory in left field at Camden Yards, and the rainy weather kept the crowd to a minimum, making a home run snag a real possibility. Ironically, his first big chance to snag his 40th career game home run came from a guy with only two home runs on the year. Mariners' third baseman Matt Tuiasosopo came to bat with two men on in the second inning and ripped a line drive to left. Gold determined quickly that it was going to have the distance to reach the seats. He moved towards the ball, which was headed for the section on his right, but a railing prevented him from taking a straight shot to the landing spot. He had to negotiate his way around the railing, costing him valuable time. "If I'd had more time to get there, I might have had a shot at a leaping grab," he said. "Instead I made a desperate leaping lunge and just hoped for a nice bounce." Despite failing to make the catch on the fly, Gold stayed focused, determined to track down the ball after it landed. "I never lost sight of the ball when it hit the seat and I knew exactly where it was," he said. "I had been on a dead run, but I stopped in my tracks, climbed over a row and plucked the ball out of the seat before anybody else could arrive on the scene." Even after his first home run snag in over a decade, Gold didn't break out into an over-the-top celebration. He felt the satisfaction of finally reaching 40 gamers, but going crazy after a snag has never been his style. "I've never been one to celebrate after a snag, that's just not my personality," he said. Another thing that's not his style is throwing home run balls back -- another fan yelled at him to throw it back, but he kindly refused. Gold's home run snag was his only ball on the night, but he is slowly inching towards the 1,000 ball mark. As of today his lifetime total stands at 949. Watch Rick Gold's 40th home run snag on MLB.com