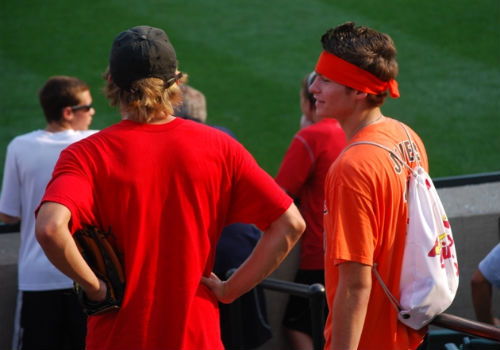 Anderson (left) and Huff (right) both snagged double-digits for the first time this year.Baltimore ballhawk Tim Anderson, AKA Mr. Shagtastic, began his monthly myGameBalls.com column on Thursday by contrasting the ballhawking atmosphere at his hometown ballpark with that of nearby Nationals Park. The friendly staff at Camden Yards, he argued, made the Baltimore experience far superior to that of Nationals Park, where strict ushers greatly impede ballhawking. In fact, he encountered an usher at Nationals Park who tried to make him stop ballhawking because he had snagged too many balls. Too many balls? There's no such thing in Baltimore, and Mr. Shagtastic was proven correct Thursday night when he and Ben Huff, AKA Shag Daddy, combined to snag 24 balls at Camden Yards. "Every aisle was open, every bounce came my way, and it helped that Rangers hit 1000 balls into the seats," said Huff, who snagged 13 balls on the day. "I knew it was gonna be a good day when I snagged 6 in the first half hour." Anderson got off to a slower start but ended up with almost as many, finishing with 11. "A lot of people just have those kind of days where the balls just find you and it was one of those days for both of us," he said. "When you consider I only had two balls after Orioles batting practice, you can see what I mean. I made the switch from left field to right near the end of Rangers batting practice and right when I entered the seats, a ball bounced off the rubberized warning track and came right to me as I walked down the stairs." The snagging clinic put on by Mr. Shagtastic and Shag Daddy included 17 hit balls, six toss-ups, and one retrieved ball. It was truly a day when just about everything went their way. "I had never experienced anything like the day we had," Anderson remarked. "Ben even got a toss-up from a police officer." Check out Tim Anderson and Ben Huff's blog, Baltimore's Finest