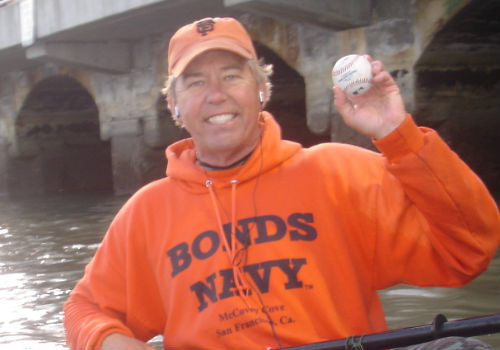 While the spoof ball is well out of sight, Edlund holds up the true Adam La Roche homer.If a "Ballhawking Bloopers" DVD is ever produced, Dave Edlund definitely earned a spot in the video on Friday night at AT&T Park. In a hilarious scene, Edlund fell out of his kayak and into McCovey Cove while trying to "throw back" a home run ball. He would gladly accept his place in a blooper reel, though, because he successfully snagged an Adam La Roche homer for his fifth game home run of the season, tying him with Ballhawk Shawn for the myGameBalls.com lead. He also redeemed himself from a failed attempt at a La Roche homer back in 2007. Edlund had two main competitors for this home run, the 21st ever splash hit by a non-Giant. The first was rival ballhawk Joe Dirt, who stands on dry land and tries to fish balls out of the cove with a fishing net. The second was Martin Wong, an experienced kayaker and ballhawk who snagged Barry Bonds' 757th home run out of the Cove. When the ball landed in the Cove in the top of the first inning, Joe Dirt got the first crack at it but had trouble contending with some strong winds in the Cove and came up empty. This set up a two man race between Edlund and Wong. "Just when the ball was hit I was a bit out of position as my kayak was facing towards the stadium," Edlund said. "I prefer to point my kayak into the wind. Martin turned his kayak faster than me and he was right on my tail as I raced and eventually grabbed the ball." That's when things got interesting. Giants' fans were demanding that Edlund throw it back, but he was well prepared for this moment. He took a "spoof" ball out of his kayak and reared back to attempt to chuck it deep into the Cove. Things didn't go quite as planned, however. "I threw it so hard that I lost my balance and I plunged into the Cove for the very first time ever," he said. "It was all caught on TV. I was laughing as I couldn't believe my clumsiness." He'll be laughing at this experience for years to come, and the best part is that the real La Roche home run ball is still safely in his possession. Watch Dave Edlund's 5th Home Run snag of the year on MLB.com