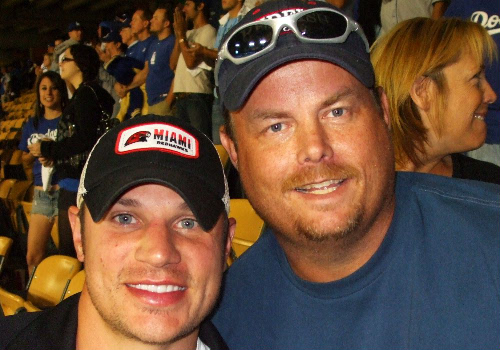 Once you've snagged 1000 balls, and certainly once you've snagged over 3000, each additional hundred isn't all that significant. For John Witt, AKA Major League Ballhawk, snagging his 3800th ball over the weekend is merely a step on the ladder toward the true milestone - 4000. Number 3800 was truly unlike any other he's ever snagged. Instead of outmaneuvering other fans or making a leaping catch for a home run ball, Witt obtained this ball by using his knowledge of baseball statistics. Participating in a baseball card trivia game in the Family Zone at Angel Stadium, he successfully picked out the baseball card of the player with the most stolen bases in 2008 (Willy Taveras). The successful trivia answer earned Witt a choice of prizes. "On the table they had about 20 prizes including 2 games used MLB authenticated game balls," Witt wrote on his blog. "My choice was 1 game ball or 2 of anything else. Of course I went for the game ball!" Not surprisingly, some may question whether or not this should be counted is his statistics. "Ok so I know it wasn't exactly the way I wanted to get this ball," he wrote. "HOWEVER, it was a ball that I acquired at a Major League Baseball game INSIDE the stadium and therefore I am counting it in my collection. I feel it should count simply because I had to work to get it!" Witt hasn't attended as many games this season as he usually does, but has had some memorable moments. Besides his 3800th ball, Witt also caught the 100th game home run ball of his career on May 25 at Angel Stadium, snagging a Jermaine Dye homer in the left field bleachers. 100 game home run balls is a truly remarkable feat and sets him apart from every other ballhawk in that category. On myGameBalls.com, the closest competitor has 39. Read more about Major League Ballhawk John Witt on his blog