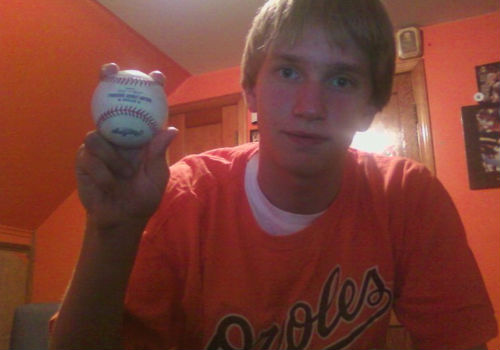 Anderson holds up Adam Jones' 49th career home run.Outfielders are taught that when a high fly ball is hit in their direction, their first movement should be backward rather than forward. Even with this advice, many have learned the hard way what happens when they position themselves too far forward and then try to backpedal at the last minute as the ball sails over their head. It's no different with ballhawking, as ballhawk Tim Anderson learned Tuesday night in Baltimore. He was well prepared with a glove and a good seat in the left field bleachers, but he botched his first big opportunity, a home run hit by Aaron Hill. Anderson quickly moved towards the ball as it came off the bat but then watched helplessly as it flew over his head by about five rows. Remarking to his girlfriend that this wasn't the first time he had positioned himself way too far forward in the bleachers on a home run ball, he made a mental note to take his initial step backwards on the next one. Thankfully, the opportunity to redeem himself would come quickly. Adam Jones ripped a high fly to left and Anderson wisely resisted the urge to run forward. "I ran up the stairs and thank God it was hit so high and was in the stairway because that gave me time to recover and rush back down the steps," he said. "My height advantage and the fact I was on a higher step than everyone else made the catch possible." Anderson's snag, which was a clean catch on the fly, was his second game home run of the season. He missed batting practice and the Jones homer was actually the only ball he snagged all night, keeping alive a streak of 19 consecutive games with at least one ball. Anderson, AKA Mr. Shagtastic, actually redeemed himself in more ways than one with the big snag. Back in August, he was narrowly beat out by veteran ballhawk Rick Gold for a home run ball, and Gold was back in town Tuesday night, also sitting in the bleachers in left. Gold was one of several fans who rushed into the aisle to position themselves for the snag, but Anderson's position on the higher step allowed him to get to the ball first. Anderson is barely visible in the video behind the crowd of people, so much so that it's not even clear that he's the one who came down with the ball. "I check my phone after the catch and saw Ben Huff (bhuff) texted me," he said. "[He was] still talking about my missed catch, and saying 'you win some you lose some' ... mocking me. Little did he know, I just won one." Watch Tim Anderson's home run snag on MLB.com