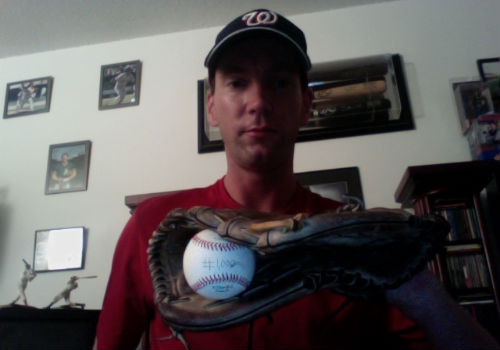 Gold's 1000th ball, shown above in the glove, was snagged 18 years after he snagged his first back in 1992.In 2008 Rick Gold, a veteran ballhawk of nearly 20 years, was "semi-retired" from ballhawking. He attended 31 games but didn't make much of an effort, if any, to snag balls and finished the season with a total of 14 baseballs. With the emergence of a thriving ballhawking community last season, Gold began to contemplate coming out of retirement. He snagged a few more balls, 27 to be exact, but he still wasn't quite ready to return in full force to the hobby that routinely earned him over 100 balls a season in Oakland back in the 90's. Like Brett Favre, he was wavering. Then when the 2010 season hit, the temptation to make a ballhawking comeback was simply too much. "The combination of MyGameBalls.com and being within spitting distance of 1,000 is what inspired me to get back out there this season," he said. Sitting on a total of 880 career balls prior to the season, Gold still expected that it would take him a couple seasons to reach his ultimate goal of 1,000 baseballs. Nevertheless, he decided to go all out in 2010, setting up a schedule for himself that included over 60 games and 10 different ballparks. One of those ballparks, Nationals Park, became the ballpark that primarily made ball number 1,000 a real possibility this season. He attended 12 games there and over the course of the year went from snagging two or three balls per game to routinely hitting double digits. In fact, he snagged 11, 11, and 12 balls in his three most recent games there. So it was fitting that the second of those three games, Tuesday in Washington, was also the game that he officially joined the 1,000 ball club. Still eight balls away from the milestone when the day began, it would take a huge day to reach 1,000, and Gold came through with one of the best outings of his career. As he did at the September 7 game in DC when he snagged 12 balls, Gold went to the right field bleachers for BP and proceeded to put on a snagging clinic. Not seeking any toss-ups, he snagged seven home run balls to put his career total at 999. He had waited years for this moment, so there were quite a few thoughts going through his mind. "My first and 500th balls were game home runs, so in a perfect world a gamer would be nice for my 1,000th," he said. "But I needed to get this over with. It definitely had to be a hit ball though. If a player would have thrown me a ball, I swear I would have just gotten out of the way." Gold's opportunity would come when Angel Sanchez hit a deep drive to right that landed two sections to his left. The ball had sailed just over the heads of a group of five fans, but Gold out hustled them all and got to it first. "It would have been nice to catch my 1,000th on the fly, but this was actually fitting," he said. "My strength as a ballhawk has always been covering a lot of ground and outrunning people for baseballs. Running two sections for a ball I shouldn't have had a shot at and ending up with it anyways is a nice snapshot of my ballhawking career." Also a trademark of his ballhawking career has been his ability to snag a high percentage of his balls off the bat. This season has been his most impressive in that respect -- of his 134 balls, 113 of them, 85 percent, have come from hit balls. So now that Gold has finally reached his goal, will he be going back into semi-retirement? Like Brett Favre, he's indecisive. "My original plan was to go back into semi-retirement after I got to 1,000, but the success I've had the last month has me wavering," he said. "Now that I know I can still run around the bleachers without making a complete fool of myself, I'm not sure I can give that up again." Browse Rick Gold's complete baseball collection on his Member Page