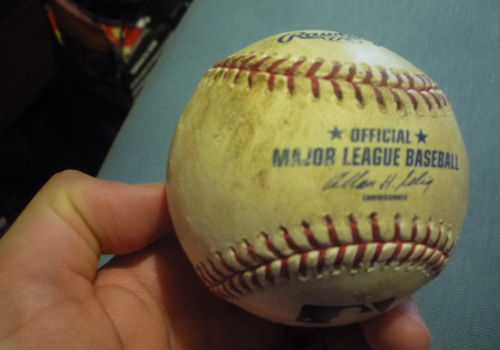 The Kouzmanoff foul ball had a few smudges on it from the wear and tear of being used in a live game.Oakland A's fans were treated to some fine entertainment last weekend at the Oakland Coliseum when a Chicago White Sox fan tracked down a foul ball and proceeded to celebrate with a series of Jersey Shore-style fist pumps. Their response, of course, was resounding boos for the overly zealous ball snagger from the windy city. Little did they know that the ballhawk in question wasn't from Chicago and wasn't even a White Sox fan. Despite being decked out in Sox gear, the fan was none other than New Yorker and myGameBalls.com member Ben Weil, AKA Benny Bang Bang, who was rejoicing over his third career foul ball. Weil wore his White Sox attire to the lower first base section hoping to attract some attention and get a toss-up from the visiting Sox. Disappointingly, he wasn't able to direct any toss-ups his way, but a couple foul balls found their way into the sparsely-populated seats on the first base side. The first of the two resulted in a defeat due to what Weil describes as a "simple mistake." When the ball sailed over his head in the fifth inning, he took off running towards the empty section where it landed. He got there first but chose to run down the wrong row of seats, allowing a late-coming fan to grab it from the row in front of him. But as happens often in ballhawking, another opportunity was just a couple innings away. Kevin Kouzmanoff fouled off a pitch in the seventh inning, and Weil again raced towards it. It was an even longer run this time, but he was even more determined to track it down. This time he chose his row wisely, deciding to position himself a few rows below a handful of other fans. Just as he had hoped, the ball rolled down the steps into his row, where Weil and another fan went one-on-one for the ball. "As I got to the ball, he started reaching over towards it, and it was just on the edge of falling down another row," he said. "but I grabbed it, barehanded, and raised it up, with a fist pump, with excitement and jubilation. And then I pumped my fist, raising it up high 2 more times, mainly to show off to my friend who I was with, to let him know I had got the ball." That's when the boos started, and of course Weil couldn't even begin trying to explain to the crowd that he wasn't really a White Sox fan. He didn't care too much as that point though, because he had just snagged his third career foul ball. Although he's from New York, all three of his foul balls have been snagged on the road. In addition to the Oakland ball, he's also snagged a foul ball at Miller Park and U.S. Cellular Field. Check out Ben Weil's complete collection on his Member Page