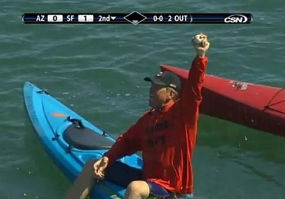 Drenched in water, Edlund victoriously displays his latest gamer.It was a familiar scene at AT&T Park last night, with the usual elements in place. You had Pablo Sandoval, McCovey Cove, Dave Edlund, Joe Dirt, some kayaks, a fishing net, and of course a baseball. Oh, and this time a new face was added to the scene - that of kayaker and ballhawk Bill Ogle. An exciting drama unfolded, one that was featured on the evening Sportscenter broadcast, and it ended in typical fashion -- with Edlund holding a Pablo Sandoval home run ball in his tightly-clenched fist. It was the third time this season he's scored a Sandoval homer, and with the snag he captured the myGameBalls.com lead for 2010 game home run balls with six. When Sandoval launched the long fly towards the cove in the second inning, Edlund was caught somewhat unprepared. He had taken his radio off his head in order to talk to a friend and didn't realize what was happening until he heard the roar of the AT&T Park crowd. "I have heard that roar before and I know it usually accompanies a HR or a very big play," he said. "I looked up at the edge of the stadium and saw the fans looking up which confirmed the ball was coming my way." He looked frantically but didn't actually make eye contact with the ball until it splashed into the cove. At that point, Ogle had the clear advantage because Edlund's kayak was pointing in the wrong direction. Ogle paddled towards the ball while on the shore Joe Dirt was reaching out for it with his fishing net. Edlund quickly realized that his only chance would be to abandon his kayak and brave the cold water in the cove. He dove into the water wearing only a swimsuit, hoodie, and baseball cap, and aggressively swam towards the ball. As Edlund, Ogle, and Joe Dirt all battled for the ball, television cameras were recording the entire episode. "At one moment Joe's net was a foot from the ball and Bill and my hands were inches from the ball," Edlund recounted. "There was white water everywhere. But for some lucky reason, I was able to get my right hand on the ball seemingly 1/100 of a second before Bill did and I held on tight. I lifted it up to the Giant fans that where standing along the stadium wall and they roared back!" Score another victory for Edlund, who has now snagged four out of the five career homers that Sandoval has deposited into the cove. Interestingly, Sandoval's five splash hits put him in a distant second place to Barry Bonds, who recorded 35 splash hits in his career. Watch Dave Edlund's home run snag on MLB.com