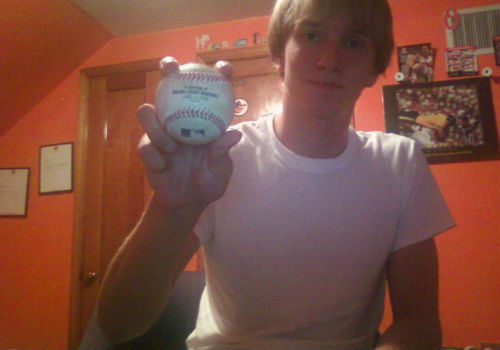 Anderson holds up the home run ball, which to the crowd in Baltimore appeared to be thrown back onto the field.Tim Anderson's main goal for Saturday's game at Camden Yards had nothing to do with ballhawking. Seeking to become the "Fan of the Game" and earn himself some cool prizes, he arrived at the stadium with a painted chest and some bright orange apparel. During the game he wasn't aggressively seeking out home run balls, and in fact he sat in the middle of a row and didn't even wear a glove, but somehow a home run ball managed to find him. Anderson's day began with a solid performance in batting practice in which he snagged seven balls even while competing with Zack Hample and Ben Huff. Pleased with his haul for the day, he sat back and enjoyed the game from his seat in left field, rooting on the O's in their final series of the season and waiting for his chance to compete for Fan of the Game. It was unusually crowded for a game in Baltimore, with over 35,000 fans in attendance, so he knew the chances to snag a gamer would be slim to none. But luck was definitely on his side when the Tigers' Brandon Inge came to bat in the second inning and launched a home run towards his section. "Inge hit the ball extremely high and all I saw was Corey Patterson track backwards," Anderson remarked. "I jumped over the row in front of me and was able to make it into the next section. I saw the ball sitting on the ground a row below where I was so I dove head first onto the concrete, grabbing the ball, and securing it to my chest." He quickly celebrated the improbable snag, but almost immediately he realized that he was holding a ball hit by the visiting team, not the hometown Orioles. He was prepared for this moment, and ran to his bag to switch out his newly-snagged gamer for a BP ball. He grabbed the BP ball and fired the ball onto the field with such force it seemed as if he was trying to get Inge tagged out at the plate. "I threw it so far that I was worried I was going to hit Cesar Izturis at shortstop, but thankfully it short hopped and he turned around and scooped it up," Anderson said. He suffered a bad scrape on his hand from the dive on the concrete, but he was happy to have ended his season of ballhawking at Camden Yards in such dramatic fashion. It was his third game home run ball of the season, and he also finished the regular season with a total of 88 balls. Check out Tim Anderson's Blog, Baltimore's Finest