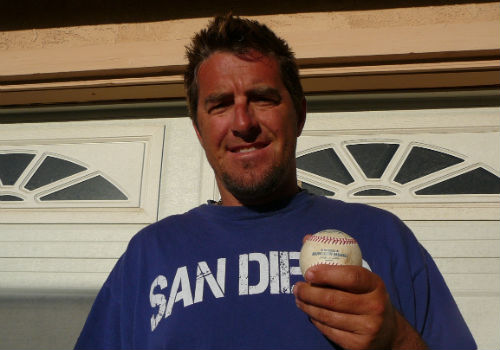 Andruski shows off his first foul ball of 2011.What's the first thing a ballhawk packs when he takes a baseball road trip? Yep, it's pretty much a no-brainer -- his baseball glove. But when Mark Andruski packed his bags for Arizona last week, somehow his most basic ballhawking tool got left at home. At that point many ballhawks would have stopped off to buy a cheap Wal Mart glove, but Andruski decided to man up and do his ballhawking barehanded. After four days of gloveless ballhawking, he had collected 28 balls, twice as many as his 2010 Spring Training trip. His best day came on Monday March 7 at Camelback Ranch, home of the Dodgers and White Sox, when he completely cleaned up by snagging 16 balls. Arriving at the stadium in the midst of 20-30 MPH winds, Andruski stopped and sized up the competition before beginning his ballhawking day. "After 10 minutes or so, I figured out the best way to play it," he said. "None of those other guys could see the ball off the bat. So it was pretty easy pickings. Amateurs!" he joked. Later on that night, Andruski capped off a huge day of ballhawking with an on-the-fly snag of a Cody Clark foul ball. Late in the game at a sparsely-poulated Peoria Stadium, Clark fouled one off toward Andruski's section down the right field line. " I thought it was going like 5 rows back, so I stepped over the seats a row back, but the ball started blowing back towards the field," he said. "That was they key. By going back one row I was higher than the other couple of guys reaching for it. I barehanded it two hands." The clean catch got the attention of the camera crew, and within seconds Andruski was getting text messages from friends who had seen it on TV. "We got good tv time, like 30 seconds or so," he said. "The announcers were talking about us at the game and my weird beanie cap I was wearing, cuz I was cold. Mark Grant, the Padres announcer said the team should slap an SD on those beanies and use it as a giveaway this year." In a few short weeks Andruski will back at PETCO Park, this time with his glove.