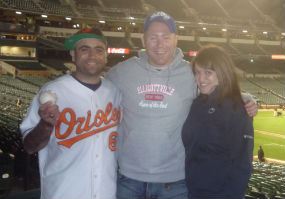 Weil, Scott, and Leigh pose for a photo after the game.By now we've all seen the YouTube video from last season of the guy who cowers in fear while a hard-hit game ball nearly takes out his girlfriend. Men everywhere mercilessly mocked this unfortunate individual, but you have to wonder if many of these men would have reacted in the exact same way had they been in the situation. A couple weeks ago in Baltimore, a guy actually pulled the exact same move, but luckily for him it didn't get posted on YouTube. Plus, this guy's good friend, seasoned ballhawk Ben Weil, was there to save his girlfriend from being knocked out by the foul ball. Weil was sitting in a great spot on the first base side with his friend Scott and Scott's girlfriend Leigh. When Danny Valencia hit a foul ball their way in the eighth inning, a crazy scene unfolded. "It felt like slow motion, because it looked so simple, as if someone was playing catch with me," Weil recounted. "I lean to my left and make the backhanded stab, three seats over. Now, I'm just focused on catching the ball as I see it coming, but here's what I see immediately after: Scott is hiding behind me avoiding the ball, and my glove was in front of Leigh's face, literally." It was Weil's fourth career foul ball, and first ever on-the-fly snag of a game ball. The moment will be forever etched in his memory, not only because of the glory of making the snag, but also because of the overall hilarity of the situation. No doubt Ben and his friend Scott (whose last name is being withheld to protect his reputation) will share laughs about it for years to come. "She [Leigh] was making no attempt at the ball or getting out of the way, she was just trusting I wouldn't let anything happen to her," Weil said. "I think she was also trusting that her boyfriend was going to protect her, rather than hide behind me, but that's neither here nor there." Check out Ben Weil's complete collection on his Member Page