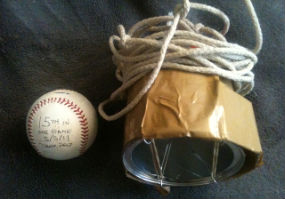 Gold's 15th ball of the day is shown here, along with his retriever which combines elements from both the Cup Trick and Glove Trick.Back in his Oakland days, Rick Gold built a one of a kind ball retriever consisting of a Planter's Peanut can, a weighted doughnut, paper clips, and two rubber bands. After a couple years of using the device, he decided to put it on the shelf. "I ultimately stopped because I determined that the time I spent swinging a cup on a rope was taking away from my chances to get hit balls," he said. But last week in Atlanta he brought the retriever out of retirement, knowing that a gap existed at Turner Field between the fence and the stands. The decision paid off with one of his best outings as a ballhawk, snagging a total of 15 balls on May 5. In addition to having his retriever working for him, Gold also was on his game in terms of snagging BP homers. Utilizing the expansive Turner Field bleachers, he grabbed multiple home run balls from several high-profile hitters -- Jason Heyward, Brian McCann, Ryan Braun, and Prince Fielder. He also snagged one off the bat of Chipper Jones. As BP winded down, Gold went to work with his retriever. In a span of just a few minutes, he picked four balls off the ground in the gap to run his total from 11 to his career high of 15. In all, his day included seven balls snagged via his ball retriever. "When all is said and done, 15 is just a number," he said. "I've gotten 10 or more hit balls in one batting practice three times, and those games were far more satisfying than this one. My retriever will go back in the closet for the foreseeable future. I'll probably break it out again the next time I visit Arlington or Atlanta, but otherwise I'm back to quality over quantity." Check out Rick Gold's complete collection on his Member Page