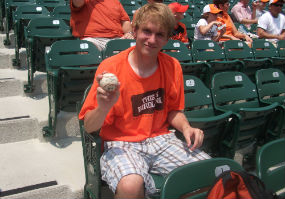 Anderson's quick switcharoo allowed him to get applause from the Baltimore crowd while still keeping the Damon home run ball.Baltimore ballhawk Tim Anderson not only expects to snag home run balls, he actually prepares in advance for what he is going to do *after* he snags them. Anderson puts his creative talents to work by preparing "decoy" balls -- balls with comedic phrases or pictures that he plans to throw onto the field should he snag a home run ball from the visiting team. Last weekend he provided fellow ballhawk Avi Miller with a decoy ball after Miller snagged a grand slam ball, but this past weekend it was his turn. It wasn't a grand slam, but it was a leadoff homer from one of the top players of the past decade, Johnny Damon. The snag was far from routine, but he was able to fend off the competition and make the snag in the right field flag court. "I could never judge the balls on the flag court, so of course I charged in for it, thinking I had a clean snag of it," he said. "It ended up sailing over my head. So, using my basketball skills, I boxed the two guys out behind me and waited for the rebound. It skimmed off the ground, then off the fence, and went straight up. I did my best Dirk impression and out-jumped two 30+ year old drunks for it." There obviously wasn't any celebration from the hometown crowd, but Anderson was well prepared to do something that would please them. He whipped out a decoy ball branded with the Twitter hashtag "#LEGGO," a tribute to Adam Jones, and threw it onto the field. This wasn't your typical home run toss-back, however. With a running start, Anderson unleashed a bomb that almost made it into the infield, landing near Orioles first baseman Luke Scott. Jones no doubt would later see the Twitter shout-out, and Anderson of course went home with the true home run ball, a ball that promises to be fairly valuable given Damon's stellar career. Check out Tim Anderson's complete collection on his Member Page