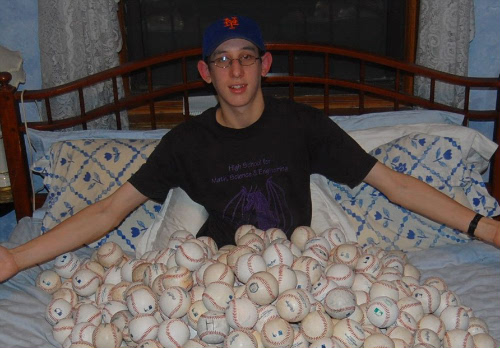 Greg Barasch continued his dominance of Nationals Park, snagging 15 balls and establishing a new career high. In his career at Nationals Park, he is averaging a staggering 12.4 Balls Per Game. "Nationals Park is incredible for balls," he said. "I'd say the reasons for that include the early gate-opening times, the large sections of seats in the outfield, and the fact that most of the games I've attended there have been pretty empty attendence-wise (although this game was very crowded)." The highlight of his day came in batting practice, when he caught two consecutive Jeff Francoeur home run balls (one on the fly) within a minute of each other. Barasch also snagged two consecutive third-out balls during the game, and ended his night by getting a ball from home plate umpire Mike Winters. Barasch is currently in second place on the 2009 leaderboard. With well over 700 lifetime balls, he is in 4th place on the lifetime leaderboard. He extended his consective games streak with at least 1 ball to 130, and also recorded his sixth straight game with at least 8 balls. Check out the details of Barasch's performance on his Member Page