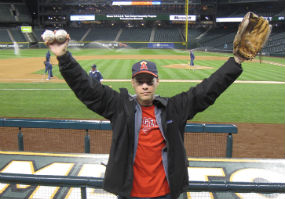 Hample displays his final two balls, including his record-breaking 12th ball of the game.Even with his foot in a cast, Zack Hample finds a way to break records. This week Hample was hobbling around on crutches at Safeco Field in Seattle and still somehow managed to break the Safeco Field record by snagging 13 balls in a single game. Incredibly, his total could have been even higher had he not been banned from using his glove trick by security personnel. He started the day by snagging three balls with the glove trick from the outfield bullpen, but shortly thereafter he was informed that he would no longer be allowed to use the device in either bullpen. Hample's lack of mobility prevented him from being able to run around for BP home run balls, but he played the toss-ups well, grabbing six of them during BP. He also managed to snag a couple hit balls, and when the game began he had reached double-digits. During the game he snagged his 11th ball after a crazy series of events allowed him to pick up a foul ball that had injured the hand of another fan (who happened to be Todd Cook's mother). The foul ball tied him with Max Van Hollebeke for the Safeco Field record, and after the game he gained sole possession of the record by scoring two more toss-ups. Hample now has a mind-boggling total of 428 balls this season, and we're still a month away from the All-Star break. He's planning on hitting all 30 stadiums this year, so many other stadium records could be in jeapardy. Visit Zack Hample's Blog to read the first-hand account of his record-breaking performance