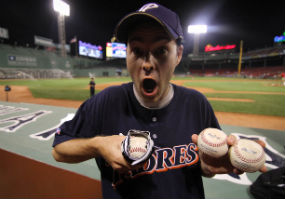 One of Hample's three post-game balls was delivered to him tucked inside of a batting glove.Fenway Park, while being one of the most beautiful and historic stadiums in the league, is known for being a ridiculously hard place to snag baseballs. So hard, in fact, that prior to this season the myGameBalls.com record for balls snagged in a game there was just eight, set by Greg Barasch in 2009. So when Zack Hample arrived at Fenway on Tuesday afternoon still limping around with his foot in a cast, a record-setting performance wasn't likely. But given the fact that he's snagged over 450 balls this season before the All-Star break, he was up for the challenge. Immediately upon arrival, Hample started racking up toss-ups. "It was beautiful," he wrote on his blog. "I stayed in one spot, but the players kept rotating, so I kept getting baseballs from them." He stayed in the zone throughout BP and into the game, tying Barasch's record on an in-game toss-up from Anthony Rizzo. The game ended with Hample stuck on eight, but he got a ball from umpire Brian O'Nora and two additional post-game toss-ups to set a new myGameBalls.com record and become the first ballhawk to snag double digits at Fenway. Read more about this record-setting performance on Zack Hample's blog