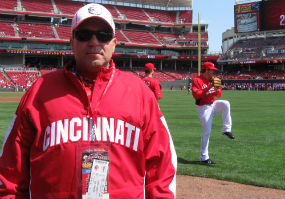 Sinisi spends almost as much time at Great American Ballpark as the players.He may be one of the oldest ballhawks in the field here on myGameBalls.com, but he's having no trouble whatsoever keeping up with the young bucs. His name is Rocco Sinisi, and the 50 year-old from Mason, Ohio has surged into the top 10 after an outstanding month of June in which he snagged 67 balls. He's also known as the Ball-Hawk Rock, and his season total currently stands at 128 despite only beginning his ballhawking hobby a couple years ago. A retired Army Sergeant, he credits Zack Hample for inspiring him to go from casual fan to serious ballhawk. "Now I am a baseball fanatic," he said. "The first one in the park, and the last one out! I am very competitive. I am also very active and young at heart. I make out my lineup cards, wear the gear, and swap out the teams' gear." Sinisi has recorded some huge games this season, most notably a 14-ball performance on June 17. He currently holds the single-game record at Great American Ballpark with 16 balls, set on September 30 of last year. His most memorable snags this season have been his 100th ball (tossed by Zack Greinke), his 200th ball, and toss-ups from Josh Johnson, Mariano Rivera, and CoCo Cordero (after his 300th save). Sinisi has already attended 43 games this season, and he's well known around the ballpark. "Now that I'm the number one Ball-Hawk at GABP, I teach the little kids during BP how to Ball-Hawk and how to ask for a baseball," he remarked. "I'm like the 'Pied-Piper' now, when the kids see me at BP, they follow me around and watch what I do and hang by me to get balls from the players. It's fun, I give some of my balls to the kids." Although he's now in his 50's, Sinisi has no desire to quit anytime soon. Even though he is legally disabled, he has a passion for ballhawking virtually unmatched in the baseball world. "I hope that this info will INSPIRE the young people of the Ball-Hawking community to continue to keep on Ball-Hawking and have fun at the ball park no matter how old they are," he said. "As long as I can move around, I'm going to keep shagging baseballs." Visit Rocco Sinisi's Member Page to view his complete collection