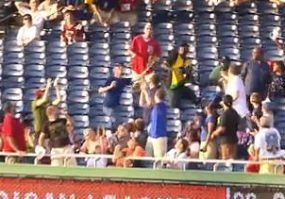 Gold can be seen in this screen shot just below the guy in the red shirt, extending his glove to attempt the snag.If you saw the highlight of Carlos Pena's homer at Nationals Park on Wednesday night you likely noticed a fan in the right field seats streaking across your television set. And if you said to yourself, "That *must* be a myGameBalls.com member," you were correct -- it was none other than veteran ballhawk Rick Gold. It was Gold's 41st career game home run, and this one was far from routine. "I hesitated, and it almost cost me," Gold said. "The ball was heading to the section to my left, where the row I was in was empty. So I had running room and I could see the ball was going to land pretty close to my row. If not for the bad jump, it could have been an easy catch. Instead I made a last-second lunge for it and was over my glove." Gold didn't give up on it though, quickly glancing behind him to try to locate the landing spot. In an instance the ball appeared in his field of vision, rolling from the second row behind him into the first. Several fans made a play on it, but Gold had the quickest hands and came up with the ball. Gold was pleased to get his first gamer of the season, but wasn't without his regrets. "I'm rather annoyed that I didn't catch the ball on the fly," he remarked. "But I stayed with it and didn't hesitate the next time saw the ball. It is good to get my first game homer of the year out of the way. Hopefully I can finish the season strong and get a couple more." Check out the video of Rick Gold's 41st game home run snag