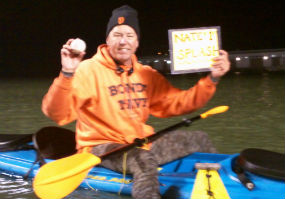 Edlund triumphantly displays the ball, along with his sign commemorating Schierholtz's first splash hit.Dave Edlund, the San Francisco ballhawk who last season led all myGameBalls members with six game home runs, was heading into the final weekend before the All-Star break without a single home run ball in 2011. Friday night at AT&T Park, however, Edlund finally got his first gamer of the season, and he did it in dramatic fashion. When Nate Schierholtz of the Giants came to the plate, Edlund dusted off a homemade sign that said "Nate's 1st Splash." If you're new to myGameBalls.com, by the way, Edlund is not your typical ballhawk. He does all his ballhawking from outside the stadium in his kayak in McCovey Cove. So with Edlund patiently but eagerly waiting in his kayak, Schierholtz launched a bomb over the right field wall and into the cove for his first ever "Spash Hit." Edlund raced to it and snagged it just in time to get some good face time on TV. He quickly whipped out his sign as the cameras zeroed in on him, prompting some comments from the television broadcasters. "It was fun as Bob Costas called the home run on our local broadcast," he said. "He called me the 'Happy Paddler'." Watch the full video on MLB.com