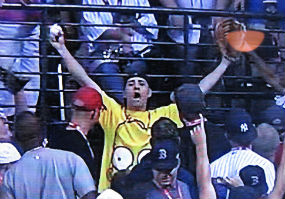 Hample's bright yellow Homer Simpson shirt made him easily recognizable in the crowd.Buried behind a sea of homer-crazed fans Monday night at the Home Run Derby stood Zack Hample wearing his yellow Homer Simpson shirt, hoping for a miracle. It took until the final round of the contest, but Hample's miracle arrived in the form of a tape-measure shot hit by the Derby's winner, Robinson Cano. Cano's blast sailed deep into the right field bleachers, where Hample was waiting to make the snag. "There really wasn't anything fancy about it," wrote Hample. "I had a little room to maneuver on the staircase, but it was pretty much hit right to me." The snag of course was captured by the cameras, and the cameras stayed focused on Hample as he immediately went into celebration mode. He threw his arms in the air, yelling out triumphantly, and then proudly drew attention to his Homer Simpson shirt. The snag was Hample's second career snag of a Cano homer, the first coming back in 2009 at Yankee Stadium. In total, he has 16 career game home runs. Read more on Zack Hample's Blog