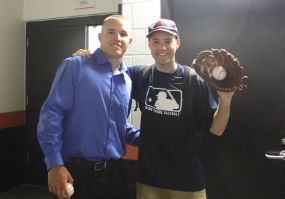 Hample poses for a photo with Trout after handing his first career home run ball.It will be many years before we know the true significance of what Zack Hample accomplished on Sunday afternoon in Baltimore. It's quite possible that Hample snagged the first career homer of a Hall of Fame player. The player was Angels' phenom prospect Mike Trout, and when he came to bat in the eighth inning Hample was well aware that he had yet to hit a Major League home run. In fact, the possibility of snagging Trout's first homer had been on Hample's mind all weekend. With Hample sitting virtually all alone in the left field seats due to the stifling heat, Trout crushed a long homer that was clearly heading for Hample's general viscinity. Ranging to his left and stepping over a row of seats, he reached up to make the snag on the fly. Almost immeditely he was approached by stadium personnel asking him to return the ball to Trout. While others may have demanded a big payoff in exchange for the ball, Hample just wanted one very simple thing. "Quite simply, if I wasn't going to be allowed to personally hand the ball back to Mike Trout, then I was going to keep it," Hample wrote after the experience. "That's the only thing I wanted -- just a chance to meet him and say hello and be connected to this special moment -- and I didn't think it was too much to ask." All parties agreed to the request, and after the game Hample got the chance to meet a future superstar. Check out Zack Hample's Blog to read more about this amazing experience