Gold Stays Hot in Washington, Snags Another Homer
For Second Straight Game at Nationals Park, Gold Snags a Game Home Run, This One From Logan Morrison
by Alan Schuster, August 4, 2011 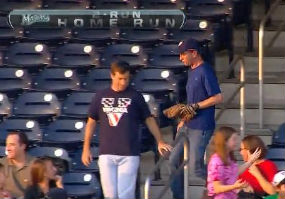 Gold heads back to his seat with his 42nd game home run secured in his glove.Rick Gold isn't much for ballhawking celebrations. But maybe when you've snagged 42 game home runs, another gamer isn't neccessarily cause for an over the top celebration. It's just business as usual. Gold snagged Logan Morrison's home run at Nationals Park last week, and after gaining possession of the ball he put his head down and bolted away from the scene in what seemed like a split second. Nevertheless, the television cameras captured everything, from Gold leaving his seat and sprinting across an entire section to him quickly returning to his seat with the home run ball in hand. "It ended up clearing the eighth row by no more than a foot, and I couldn't have asked for a more perfect bounce," Gold said about the snag, which gave him two straight games at Nationals Park with a gamer. "The ball hit the bottom of an upraised seat, bounced off the seat in front of it and just sat there right in the middle of the row as I arrived. I picked it up and hustled back to my seat to put the ball away before the usual 'Throw it back' morons could get too worked up." On the year Gold has now snagged two game home runs, and also has worked his way into the Top 10 with 148 balls. Watch Rick Gold's home run snag on MLB.com