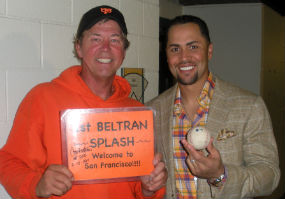 Beltran poses for a photo with Edlund, who came prepared with a pre-made sign to mark the occasion.Carlos Beltran caught fire this week, blasting three home runs at AT&T Park in San Francisco, including his 300th career homer. Two of those homers, including the milestone ball, reached McCovey Cove where ballhawk and kayaker Dave Edlund was able to snag them. "I was in the right spot and I was the lucky kayaker to grab it," Edlund said of number 300. Number 298, snagged two days earlier, was actually more difficult, as it required Edlund to abandon his kayak and swim for the ball. Nevertheless, the Beltran homer was unquestionably the highlight of Edlund's season because of all that happened after the snag. Security, on behalf of Beltran, invited Edlund to the clubhouse to meet him after the game. Edlund presented Beltran with the ball and congratulated him on reaching the milestone. "He was gracious and gave me one of his personal bats and signed it and he also signed many other items for me," Edlund said. "I am going to meet with him later this month to get his signature on home run number 298." Edlund, who has retired his "Bonds Navy" hoodie in favor of one that simply says "DAVE," was featured on camera throughout the aftermath of the homer. "One of the fun things today is that the TV announcers recognized me as I grabbed it and said DAVE got it," he said. "I just want to be a super fan and the best ball hawk I can be, but having the announcers cal my name is kinda fun!" Watch Beltran's 300th career homer and Dave Edlund's big snag on MLB.com