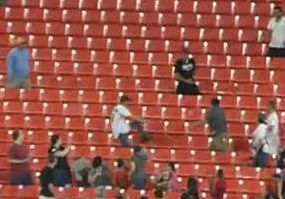 Gold (center, white jersey), hurdles a row of seats in pursuit of the Morrison home run ball.Sun Life Stadium is down to its waning hours in the baseball world, and for most people that's a good thing. It's never been a popular stadium, and most fans are glad to put it on the shelf in favor of the Marlins' brand new ballpark that will open next season. As the ballpark goes through its final games, there's one question that is on everyone's lips -- who will go down in history as the ballhawk with the greatest single-game total at Sun Life Stadium? Until Monday it seemed the answer to that question was Zack Hample, whose record of 11 balls had stood since 2008. But on Monday Hample's place in South Florida ballhawking history was put to an abrupt end. Veteran ballhawk Rick Gold, visiting Miami for the first time this season, shattered the record by snagging 15 balls, tying a career high for the New Yorker. Incredibly, 14 out of the 15 balls came off the bat. According to Gold, conditions during BP were difficult due to the sunlight being in the direct sightline of the baseballs, but he was able to make the most of the situation. "One sequence summed up my day about 15 minutes in when I was up to four baseballs," he remarked. "McCann hit one that bounced high on the center field tarp and started rolling down toward the front row. As I ran to center after it, I saw an Easter egg in the third row. I continued my pursuit of the McCann ball as Jason Heyward drilled one to center. I corralled the McCann ball when it rolled of the tarp just as the Heyward ball hit a seat and ricocheted to just a few feet from the Easter egg. I quickly rounded up those balls too, and just like that my total went from four to seven in less than 10 seconds." He finished BP with 14 total balls and sole possession of the Sun Life record, but his night didn't end there. Logan Morrison slugged a homer to right field in the sixth inning, and Gold managed to chase it down. It was his 43rd career gamer, and second off the bat of Morrison. Stadium policy allows for home run balls to be taken into the locker room by team officials to get them signed, so Gold was able to leave the ballpark with a signed ball in hand. All in all, it was one of his most memorable games as a ballhawk. "This was a much more satisfying game than my other 15-ball day, when I used a retriever," he said. "I'm also proud to set the stadium mark with just five games left here. I lived 15 minutes from the ballpark for five years and have been to nearly 50 games here. So I'm glad to hold the top spot, unless someone can beat me in the next week." Check out Rick Gold's 43rd home run snag on MLB.com