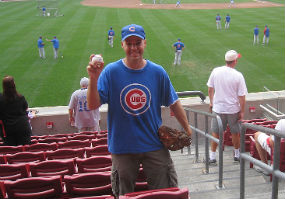 Hample poses in left field with his 1,000th ball of the season.When you consider the gravity of Zack Hample's two accomplishments at last Wednesday's game in Cincinnati, it's almost an injustice to combine them into a single article on myGameBalls.com. Hample accomplished his season goal of snagging 1,000 balls in 2011, and in the same game he broke the myGameBalls.com single-game record by snagging 36 balls by game's end. The 36-ball performance eclipsed his old record of 32, set at Kaufmann Stadium back in 2009. His haul included 15 Hit balls, 12 Thrown balls, three retrieved balls, and six Easter Eggs. Like his 2009 game in Kansas City, he once again snagged his age, this time snagging 36 balls on his 34th birthday. Hample snagged his 1,000th ball of the year during batting practice with a clean catch from the left field bleachers. With two weeks still left, he could finish the season with a total that very well may never again be matched. "When Opening Day rolled around, I wasn't even thinking about catching 1,000 balls," he wrote on his blog. "My goal was to break Erik Jabs' single-season record of 544 balls, but then I thought, "Hell, if I'm gonna go for 545, I might as well go for 600." The goal of 600 eventually became 900 which of course turned into 1,000. Reaching quadruple digits in a year seems so difficult that even Hample figured it was all but impossible. To put it into perspective, a ballhawk needs to average eight balls a game over the course of 125 games to reach the milestone. The entire ballhawking community is in awe of Hample's accomplishments, both of the 1,000 ball season and the 36 ball game. The sense of awe could easily be compared to the awe surrounding Barry Bonds' incredible 73 homer season. Which begs the question -- Is Zack Hample taking performance enhancing drugs? Read the full account of Zack Hample's record-setting day on his blog