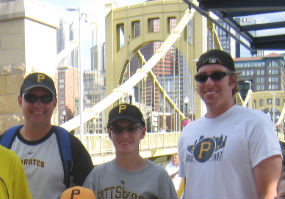 The top three contributors towards PNC Park's total (left to right): Nick Pelescak, Zac Weiss, and Erik Jabs.Since the founding of myGameBalls.com, Shea Stadium has remained on top of the list of stadiums with the most balls snagged. That's due almost entirely to Zack Hample, who recorded over 2,000 balls there while growing up in New York. This past weekend, however, a new stadium became king of the ballhawking world. PNC Park in Pittsburgh, which boasts a group of talented and dedicated ballhawks, surpassed Shea as the stadium with the most all-time snags. As of this morning PNC Park has recorded an astounding 2,580 balls. Erik Jabs and Nick Pelescak have been the key players, having snagged 1,142 and 871 balls respectively. Also making big contributions toward the total have been Zac Weiss (206), Ian Weir (95), and Steve Uhlmann (43). Here's the complete list of ballhawk totals at PNC Park. Check out the complete list of Stadium-by-Stadium stats