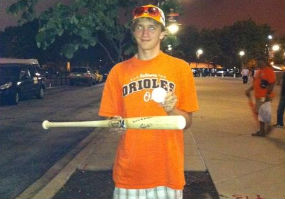 Anderson poses with the signed bat and ball courtesy of the Red Sox and Ryan Lavarnway.Just when you thought Tim Anderson was done snagging game home run balls this season, here he goes again. With just a few games left at Camden Yards in 2011, Anderson snagged his website-leading ninth homer of the year, and this one was special because it was a rookie's first Major League home run. Ryan Lavarnway of the Red Sox launched a three-run home run to the left field seats in the fourth inning, and Anderson tried to position himself for the snag as he's done so many other times this season. By Baltimore standards there was a big crowd on hand, making the Lavarnway bomb a hotly-contested one. Among those going for the ball was fellow Baltimore ballhawk Matt Hersl. Anderson tried to make a leaping snag but fell short, leaving the opportunity to Hersl who was situated directly behind him. Hersl, fully expecting that Anderson would make the catch, had trouble adjusting when the ball got past Anderson's glove. Hersl got his glove on the ball but it trickled out -- directly into the glove of a turning Tim Anderson. "It was almost as if I was a wide receiver making a basket catch," he wrote on his blog. Anderson was hoping to be able to meet Lavarnway and present him with the ball, but the meeting never panned out. Instead, he came away with an autographed bat and ball. "I'm more than happy with my Ryan Lavarnway signed bat and ball," he remarked. Read Tim Anderson's full account of his big snag on his blog