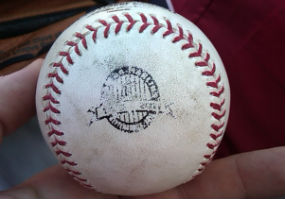 Although the logo is worn down, this ball is perhaps the most prized ball in Weil's collection.Snagging a commemorative baseball is always exciting, but Ben Weil's snag at Sun Life Stadium in late-September was extra special. That's because the logo on the ball, commemorating the final game at Sun Life Stadium, was only used in one game. Weil, a ballhawk from New York who has traveled to over 15 out-of-town stadiums this year, found himself in Miami during the Marlins' final home game before they move to their new stadium for the 2012 season. Needless to say, he was itching to bring home some memorabilia from this once in a lifetime game. Weil's big chance came near the National's dugout in the bottom of the third inning when Omar Infante grounded out to end the inning. As first baseman Chris Marrero headed off the field, Weil attempted to score the toss-up. "He noticed me, and lofted the ball in my direction," he said. "I was standing in the front row, and realized at the last second this ball was high. Really high. But all I knew was I needed THIS ball. THIS was my chance, and I could NOT screw it up." Weil jumped into the air, leaned back, reached up and came down with the ball snow-coned in his glove. In the world of commemorative baseballs, he had just snagged one of the most rare balls in existence. The snag put on exclamation point on an incredible season in which he snagged over 200 balls in 80 games. Visit Ben Weil's blog to read more about his memorable snag