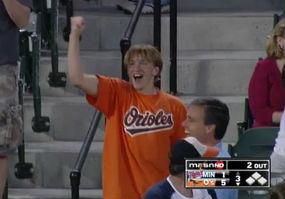 Anderson fist pumps after one of his nine gamers in 2011.In a season that featured almost constant media attention, being voted the 2011 myGameBalls.com Junior Ballhawk of the Year is just the icing on the cake for Tim Anderson. The Baltimore ballhawk was the overwhelming choice of the voters, earning 19 out of 32 first place votes and finishing with 57 points. Anderson snagged a website-leading nine game home run balls this season, including gamers in three straight games in August and two in a single game in September. He also led all junior ballhawks with 235 total balls and an average of 5.22 balls per game. Mateo Fischer finished second in the voting with 35 points after recording a personal-best 161-ball season. Here's the final tally of votes: