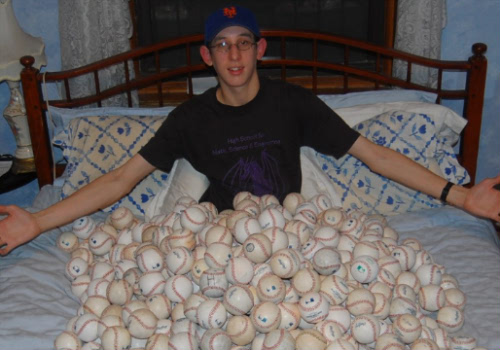 Greg Barasch continues to rack up baseballs, and this past week he eclipsed 200 for the season with an 11-ball performance at Citi Field. He's excited about reaching the milestone but is hoping to add another hundred and finish the year with over 300. "I'd definitely like to get to 300 for the season," he said. "I did it last year (including Spring Training) and I think I have a decent chance this year." The 200th ball, described by Barasch as a "lame toss-up" from Freddy Sanchez of the Giants, really didn't matter too much to him, partly because 16 of the 200 were from Spring Training, which aren't counted in the Ballhawk League stats. "I had no idea it was my 200th of the season at the time," he said. "I rarely notice these little in-season milestones until I get home and put everything in my spreadsheet." Nevertheless, the pre-game toss-up from Sanchez was yet another display of Barasch's uncanny ability to get players to give up balls. "For me, standing out in the crowd is the way to get balls tossed up," he said. "Sometimes that means getting noticed by just wearing the road team's (hopefully vibrant) colors, other times it means getting noticed by making a personalized request (while everybody else is just yelling "HERE!"). Knowing where to be is also pretty important." Barasch, a native of New York City who played baseball growing up, attended Mets games with his dad throughout childhood but didn't really get serious about Ballhawking until 2006. Since then his numbers have rapidly increased, from 99 in 2006 to 173 in 2007 to 302 in 2008. With a current total of 202 in 2009, he's got about a month and a half to surpass last season's total. "I've got a bunch of games planned in the next two weeks, and I should get to a few in September as well. We'll see what happens," he said. Browse through Greg Barasch's growing baseball collection on his Member Page.