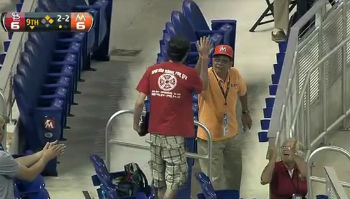 Barasch high-fives a nearby fan after the impressive snag.Sportscenter's "Top 10 Plays" typically feature diving catches, swift double plays, and towering home runs. Almost always, these plays involve professional athletes who are performing on the playing field. A couple weeks ago, however, a fan in the crowd broke his way into the Top 10 Plays by making a spectacular snag of a foul ball. Greg Barasch, a New Yorker with over 1,000 career balls snagged, made a backhanded, leaping grab of a Gaby Sanchez line drive foul ball at Marlins Stadium, wowing both the fans in attendance and those watching at home. The clip of Barasch's snag eventually got so much attention that Sportscenter picked it up. "Basically, when Sanchez hit the ball there wasn't a whole lot of time to think," Barasch said about the snag. "It was hit too hard for that. I was really only in that section for a potential slicer from a lefty, so it was a surprise to get a chance with the righty batting. All I could do was react, and luckily the ball was within my reach." Barasch was excited to experience the thrill of a live foul ball snag, but he had no idea that it would get national attention. "The Top Ten thing was awesome and very much unexpected," he said. "I got a text from a college friend a few minutes after the catch who'd seen it live, then a little while later a fan near me (the one who high-fived me in the video) said the play was all over ESPN." Check out the video of Greg Barasch's Top 10 snag on MLB.com